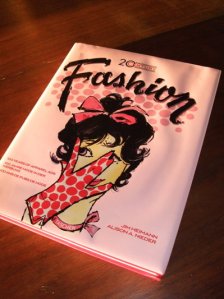 My book, “20th Century Fashion: 100 Years of Apparel Ads,” was just released by Taschen. The book is a fashion-focused take on Taschen’s iconic ad series and features some great advertising imagery—from the corset and hosiery ads of the early part of the 20th century, to those iconic Esprit and Benetton ads from the ’80s.

I am an ad fan from way back; I collected Guess and L.A. Eyeworks ads back in the ’80s and once considered pursuing a career writing fashion ad copy. So, this project was great fun for me.

The book follows the story of the 20th century, with the ads illustrating changes in style, silhouette and sentiment. The first two decades are filled with ads created by the great illustrators of the day, including J.C. Leyendecker, Coles Phillips and George Petty.

The swimwear ads in the book are especially beautiful—in particular Jantzen, which is celebrating its 100th anniversary this year. And, of course, I love the ’50s and ’60s ads, which are filled with whimsy and optimism—often inadvertently hilarious copy—which eventually gave way to the increasingly racy ads of the ’70s, ’80s and ’90s (yes, I’m talking to you, Calvin Klein).

I open the book with an anecdote that I think captures one of the iconic moments in 20th century fashion history.  In 1947, the Queen Elizabeth ocean liner docked in New York with Christian Dior and Salvatore Ferragamo on board. Both were on their way to Dallas to receive Neiman Marcus fashion awards. This was just six months after Dior introduced his New Look, and a New York Times reporter was there on the dock to ask the designer to defend the style. The New Look, with its luxuriously full skirts and tightly corseted hour-glass silhouette, was a dramatic shift from the slim skirts and masculine jackets of wartime fashions. I love the idea that Dior’s look was so radical, a reporter raced down to the dock to ask him about it.

Can you imagine that happening today?