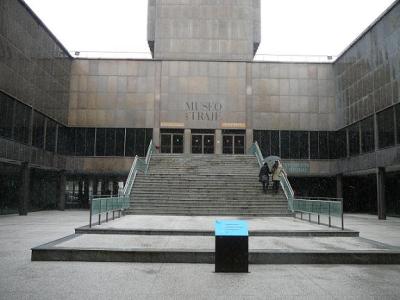 The fashion museum I frequent most is the Museum & Galleries at the Fashion Institute of Design & Merchandising in Los Angeles. But when in New York I usually try to drop by the The Costume Institute at the Metropolitan Museum of Art and the Museum at FIT at the Fashion Institute of Technology. And trips to Paris and London are not complete without a visit to the Musée des Art Décoratifs at the Louvre or the Victoria and Albert Museum, respectively.

A few years ago, I had a chance to visit the Museo Salvatore Ferragamo in Florence (a must for shoe and classic film fans) and was thrilled to stumble across the Costume Gallery in the Palazzo Pitti (also in Florence), which includes 16th-century funeral clothes of Grand Duke Cosimo I de’ Medici, Eleonora of Toledo and her son Garzia (if anyone can find an official Web link for Palazzo Pitti, I will be eternally grateful).

When I was planning my recent trip to Spain, I had all the usual cultural hot spots on my “To Do” list: the Prado, the Thyssen-Bornemisza, and the Reina Sofia in Madrid, and the Sagrada Familia, the Museu Nacional d’Art de Catalunya and the Museu d’Art Contemporary in Barcelona.

My guide book said nothing about Madrid’s fashion museum. Fortunately, I met a fashionable local who did.

Tucked away on the campus of Universidad Politécnica de Madrid, the Museo de Traje is housed in an ultra-modern building and features a permanent collection that spans five centuries and highlights Spanish designers of the 20th century and today.

I found the hyperbolic language of the descriptions pretty amusing (“Little has survived of the clothing worn in Spain’s most glorious centuries, when the sun never set on the Spanish empire”) but the 16th-century pieces (a cap, women’s doublet and gloves) on display were impressive and beautifully preserved. And the accompanying video included a nifty graphic in which flat pattern pieces were wrapped around a body to demonstrate how the clothing was constructed.

One of my favorite parts of the collection was the Balenciaga room, where designs by Cristobal Balenciaga Eizaguirre were on display. Born in Guetaria, Balenciaga worked in San Sebastian, Madrid and Barcelona before moving to Paris. I also was surprised to learn that Mariano Fortuny was born in Granada, although he spent much of his career in Venice, Italy. The Museo de Traje has several Fortuny pieces, including his signature pleated dresses, as well as embroidered tunics inspired by Moorish alijubas and theater costumes. A temporary exhibition on Fortuny, titled, “Inspiraciones. Mariano Fortuny,” opens in February at the museum.

Also interesting was the section on “majismo,” which was return to national dress in the early 18th century, during the reign of Joseph Bonoparte (brother of Napoleon). The style, which added Spanish details to French silhouettes, was a reaction to the afrancensados(or “Frenchified”) fashions popular during Bonoparte’s reign. The style was well captured by Francisco Goya’s famous “Clothed Maja” painting, which currently hangs in the Prado. 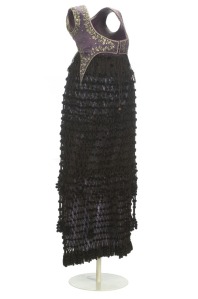 An example of 18th-century “majismo”

Another highlight was the collection of pieces by modern Spanish designers, which included a rather nifty interactive feature. To view the designs, you walked a mock catwalk, complete with thumping runway music and the sound of cameras clicking. Visitors are then asked to vote for their favorite pieces by modern Spanish designers. Those with the highest votes will be featured in an upcoming exhibition at the museum.

On my way out, I dropped by the museum’s lovely bookstore, where I was thrilled to see copies of my book, 20th Century Fashion, for sale.

Published on Jan. 13, 2010 at http://www.apparelnews.net/blog/663_finding_fashion_history_in_modern_madrid.html