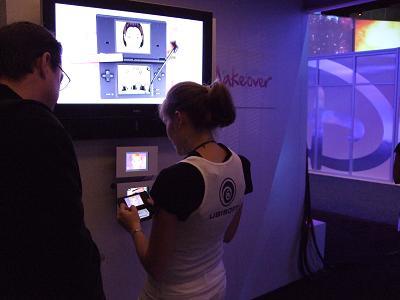 Walking around the recent E3 conference recently, I wondered “Where’s the fashion?”

The vast majority of games on display June 2–4 at the Los Angeles Convention Center stuck to the familiar warfare/sports/fantasy themes. Amid the din of virtual gunfire and aspiring Guitar Heroes, gamers lined up to test the new Tony Hawk Ride, which comes with a balance board that looks—and acts—like a skate deck. Others were trying their foot-eye coordination on the new Shaun White World Stage game, which uses the Wii balance board in place of an actual snowboard.

Still, there was a smattering of fashion opportunities on display.

Over at the Disney booth, the new Hannah Montana game allows players to design sets and select wardrobe for Hannah’s tour. The game, which launches in August, will eventually allow players to download new fashion for Hannah, her backup singers and the guys in the band. But so far, there are no plans to incorporate branded apparel, according to the booth rep.

San Francisco–based Ubisoft seems to be the most fashion-focused, with its Imagine games for tween girls. Imagine’sBoutique Owner game allows players to create their own gift shopsand Beauty Stylist lets them operate a beauty salon. This season, the company upped the ante with its new Style Lab series, set to launch this fall.

The games are designed for the Nintendo DSi, include a web camera and allow for “game-to-Web functionality,” which means players can share their experiences with others online.

The Style Lab Makeover game allows players to play with cosmetics and haircolor. (But you won’t find any beauty brands in the makeup kit.) Style Lab Jewelry Designer allows players to design jewelry for sale in a virtual boutique. The game takes the concept one step further by allowing players to purchase their own—or their friends’—designs. Made from acrylic beads and metal charms, the jewelry is manufactured on the West Coast and delivered in a few weeks. The company is hoping to keep prices below $25, according to Associate Brand Manager Karen Louie, who said the potential for expanding this video-to-finished-product concept is “limitless.”

With additional reporting by Russell Lee