An image of a Zentai suit enthusiast from The Daily Beast

When I first saw the images in a recent Daily Beast story about men who lounge around in their brightly colored and printed head-to-toe Lycra suits, I figured it had to be a joke. After all, I’ve been around, I live in L.A., I’ve got some crazy friends, but this was the first I’d heard of Zentai suits.

But a quick Google search confirms it. Zentai is for real.

According to Wikipedia (therefore it must be true), the word Zentai is derived from a Japanese term for “full-body tights” and there are retailers around the world selling the catsuits, which are typically made of a nylon/spandex blend but sometimes come in cotton or wool.

More googling turned up an e-tailer called Milanoo, which offers free shipping, prices below $50 and a few Super Hero-themed Zentai suits.  “So affordable, how could you not get one?” the site declares.

The Daily Beast story has a slide show of Zentai suits—and plenty of great quotes from Zentai enthusiasts, who apparently have a thriving community online.

On YouTube, you can watch “Zentai Girl” undulate in her Zentai suit within a second tube of stretch fabric. The video has gotten 127,597 views so far—including a few viewers who say the video inspired them to buy their own suits.

But my favorite find (so far) is funkyfeetuk’s YouTube video, in which he inflates the bubblegum-pink Zentai suit he’s wearing. The video is accompanied by a message from funkyfeetuk: “Thanks for all your views, comments, & favourites. This is me, pumping myself up in a zentai suit. (with the help of a big balloon). I’ve always wanted to do this – and now I have!”

I have a bachelor of science degree in textiles, and let me tell you, the fetish aspect of fabric was not covered in textile school—at least not at the University of Wisconsin…

Here are a few images from The Daily Beast and Milanoo: 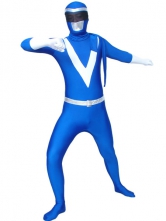