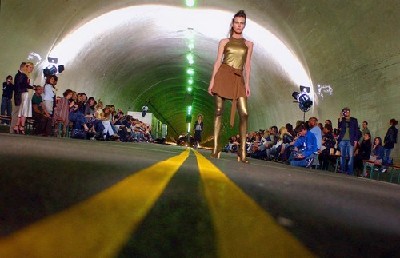 Photo from the Los Angeles Times

I was thrilled to see a photo from one of my favorite Michelle Mason shows on the opening page of the Los Angeles Times’ Web site this morning.

But I was perplexed to see that Mason was not credited, nor was the photo accompanying a fashion story. (As one of my co-workers said, “Any excuse to revisit that show…”)

The photo, in fact, was illustrating a Dan Neil story about the decline of the Second Street Tunnel in downtown Los Angeles, a 1,500-foot-long stretch that has served as backdrop to 73 auto commercials in the last three years (according to Neil). Although the story makes no reference to fashion (other than a generic caption), the photo is, in fact, from a 2004 Michelle Mason show.

That night, the tunnel was blocked on both ends with construction horses as a fashionable crowd filed in to take seats on benches set up in the tunnel’s center. As I recall, there was a slight delay to the show when a Los Angeles Fire Department truck pulled up to the western barricade with lights and sirens blaring. In true blasé fashion form, we all remained in our seats and applauded the truck as it raced past.

I was sitting with designer Estevan Ramos at the show and he jokingly asked if this was part of Michelle’s show, adding that if it were his show, he’d have had models in hotpants riding on the truck.

At the time, I remember thinking how pretty the tunnel looked and what a perfect location it was for a runway show.

Like, I said, any excuse to revisit that show…

Published on April 22, 2009 at
http://www.apparelnews.net/blog/135_mason_gets_anonymous_spotlight_in_the_l.a._times.html