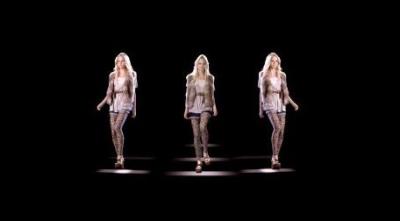 Virtual fashion show, you say? Please. Forever 21 did it one better.

The Los Angeles-based, fast-fashion emporium went a little sci fi when it kicked off an eight-city tour for its holographic fashion show.

In the show, holographic models—wearing the latest Forever 21 styles—walk an invisible staircase and disappear into starbursts.

The first show was held today in Vienna, to celebrate the opening of a new Forever 21 store. Future shows are planned for in London and New York.

Here’s a clip from the show at the Volksgarten in Vienna:

The concept was created by digital agency space150, which is the company that created Forever 21’s digital interactive billboard in New York’s Times Square last year. The digital billboard featured onscreen models interacting with customers on the street outside the store.

“Our customers are always searching for the next big thing, or fashion trends before they happen,” said Linda Chang, senior marketing manager, Forever 21, in the statement about the holographic show. “We love that about them, so we are always thinking about how to surprise them, show them things they’ve never seen before and give them new exciting ways to get involved with Forever 21.”

And here’s a clip from last year’s digital billboard in Times Square:

Video by Cliff Kuang, for his story about Forever 21’s digital billboard in FastCompany