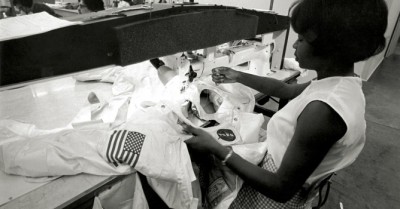 The women who made Playtex girdles also sewed the spacesuits for the Apollo astronauts.

The author, who is an assistant professor of architecture and urban design at UC Berkeley, outlines the design process of the 21-layer A7L suit, which was made by the International Latex Corporation—the makers of Playtex bras and girdles (now owned by Hanesbrands Inc.)

The Txchnologist piece includes some great “Mad Men”-esque photos from MIT Press of the women who sewed the suits. MIT Press’ website also has a nifty little interactive timeline allowing you to explore the book a bit.

And the story is jam-packed with fun facts about the American space suits and the women who made them (“Like few others in the whole process, they really had the lives of the astronauts literally in their hands,” de Monchaux says… “They had to sew to a 1/64th of an inch tolerance without using any pins. So there was no question that it was kind of a couture handicraft object versus something made according to more conventional military industrial principles.”

There’s also some fun gossipy bits about the Soviet’s cosmonaut suits. According to de Monchaux, “The U.S. spent an enormous amount of effort crafting and perfecting airtight zippers for use on pressure suits and space suits. It was an enormously complex design problem how to get the interdigitating zipper teeth to become airtight. The Soviets didn’t even bother. They just etched a kind of tube of fabric to the belly of the space suit that the cosmonaut crawled into like he was reentering the birth canal. Then they tied it and clipped it in something like a bread clip, which was also airtight.”