Callaway Golf Co.—based in Carlsbad, Calif., you know, named Timberlake its new creative director. Timberlake has been part of the company’s staff professionals team–which includes Phil Mickelson, Ernie Els, Alvaro Quiros and Arnold Palmer–for several years now. He hosts the annual Justin Timberlake Shriners Hospitals for Children Open PGA Tour event in Las Vegas and participates in the major Pro Am tournaments, according to Callaway. And he and his parents own a golf course near Memphis. Who knew?

Timberlake kicks off his creative direction with Callaway’s new Razr Fit Driver product line. Look for an ad campaign for the line early next year featuring plenty of scenes of Las Vegas landmarks.

To tide you over until then, here’s a look at some of this renaissance man’s many endeavors

Timberlake on the cover of Golf Digest in 2008 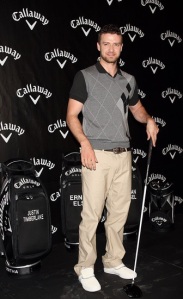 And he’s funny. Remember this spoof from Saturday Night Live?

As a blonde in his NSYNC days

And…. in his Mickey Mouse Club days