German footwear line Atheist thinks its branding is interfering with the delivery of the mail.

According to NPR, the company noticed its U.S. customers were experiencing delayed delivery and they suspected it was the packing tape emblazoned with the company brand.

The Kickstarter-funded company tested the theory by shipping 179 packages to 89 people in 49 US states—two each, one with the Atheist branded packing tape and the other with generic tape. All packages were shipped on the same day. The branded packages took three days longer (on average) to arrive than the generic packages. More damning, only one generic package never arrived, while nine packages with the Atheist tape got lost in the mail. 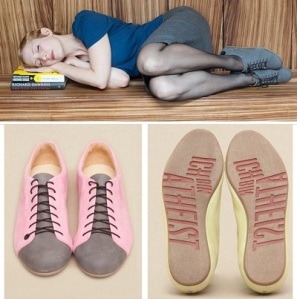