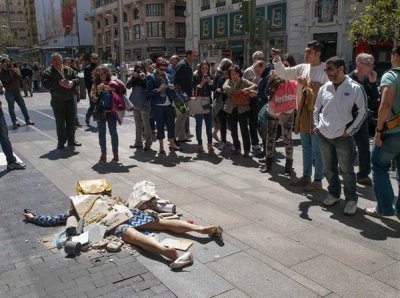 A public performance art piece by Yolanda Dominguez draws attention to the victims of the Bangladesh garment factory collapse. When the Spanish artist created her installation, titled “Fashion Victims,” on Madrid’s shopping thoroughfare Gran Via, she stopped pedestrians “dead in their tracks,” according to NPR.

Featuring a trio of fashionably dressed models buried under a pile of ruble, the work is both disturbing and affecting.

More than 1,110 people died in the April factory collapse, which occurred on the heels of several deadly garment factory fires. In the wake of the collapse and fires, many international apparel brands, including Swedish fast-fashion chain H&M, have signed on to a commitment to ensure fire and building safety at their factories in Bangladesh.

Dominguez’s piece brings the issue directly to the end consumers–right where they shop. The artist told NPR:

“The real fashion victims are not celebrities, but anonymous workers in poor conditions, in polluted countries. The images I saw [from Bangladesh] in the media of the limbs of the dead people under the rubble struck me so much, and I wanted to reproduce them.”

The video can be found here.