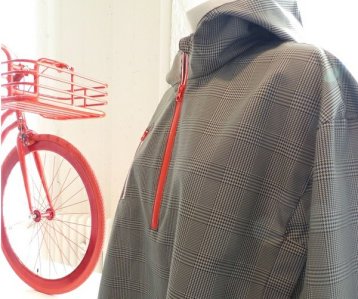 Susan Mocarski and Lorenzo Martone met at a bike trade show in New York earlier this year. He was showing his line of Martone (super glamorous) bikes and she was showingCleverhood, her collection of (super cute) unisex capes made for cycling through rainy weather.

And thus, a fashion collaboration was born.

Martone liked the minimalistic look of Mocarski’s capes and thought it would be a good fit for his bikes, which the New York bike designer describes as a “city bike.”

For the collaboration, Mocarski created capes that coordinate with Martone’s bikes. For example, Martone bikes have a signature red bike chain, so Mocarski added a red zipper to her capes.

But Mocarski kept her cycling-friendly design elements, such as the thumb loops inside the cape that let the wearer keep covered while still tooling through traffic. She also incorporates technical textiles into her designs, such as the 3M reflective fabric that, in daylight, looks like a sophisticated houndtooth print, but reflects a bold glow-in-the dark windowpane check under a bright light—such as a car’s headlight. Mocarski said the fabric comes from Taiwain, which is known for its technical textile expertise. But she’s is on the hunt for domestic-made technical fabrics, as well. One cape comes in a matte black fabric called Exoskin, which was originally designed for the military, she said. The fabric is water resistant but still breathable.

Cleverhoods is based in Providence, R.I., but Mocarski produces her capes at a facility in Oakland, Calif., which can seam-seal her capes to ensure they keep cyclists dry in a rainstorm.

Martone launched his bike company last year and in addition to the cape collaboration with Cleverhood, he’s launched a line of unisex jewelry with bike-themed details like the handle bar and u-lock closures.

Mocarski and Martone were showing their capes and bikes at the recent Brand Assembly show at the Cooper Design Space at LA Market. Brand Assembly co-founder Alex Alex Repola is a partner in Martone Cycling, which also showed at Brand Assembly’s Paris show earlier this year.

Later this month, the bike company will launch at Isetan stores in Japan.