Los Angeles brandSub_Urban Riotrecently got a nice shout out for one of its new T-shirt styles when Beyonce posted a Twitter selfie wearing Sub_Urban Riot’s “Kale” shirt. 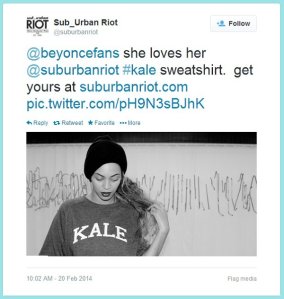 I heard the news from the Sub_Urban Riot guys, Nate Koach and Jason Reed, when I met them (and snapped a photo of the collegiate-style sweatshirt) at the recent Pooltradeshow in Las Vegas.

While at Pool, I checked out the wares from Orange County tee brand Hips and Hair, whose “Too Dumb (Poor) for New York, Too Ugly (Poor) for LA” T-shirt made me (a former New Yorker and current Angeleno) LOL right there in the aisle.

The next stop was Capsule, where I spotted LimoLand’s “I Am Never Drinking Again” shirt, which seemed perfect for Vegas. Another favorite by LimoLand founder Johnny Pigozzi was the “I Still Live With My Parents” style.

And just imagine if the owner of Pigozzi’s “Do I Need to Buy More Art” tee bumped into the owner of Hips and Hair’s “I Make Art Because I’m Pissed that I Was Never in a Band” shirt.