Betsey Johnson’s clothing has been on the LA Fashion Week runways in the past, but this season we got the famed designer, as well.

Johnson showed her Fall 14 collection on March 12 at Style Fashion Week at LA Live and it was everything you want a Betsey Johnson collection to be: bright, cheeky, whimsical and—if you’re one of what Johnson describes as “those kick-ass L.A. girls”—wearable. The look-at-me collection was packed with bold prints, lots of sparkle, faux fur and leather pieces styled with striped socks, platform shoes, knit caps and giant handbags. 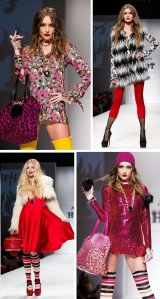 She even ended the runway presentation with her signature cartwheel and splits—under a spray of confetti shot over the catwalk by a pair of shirtless “firemen.” 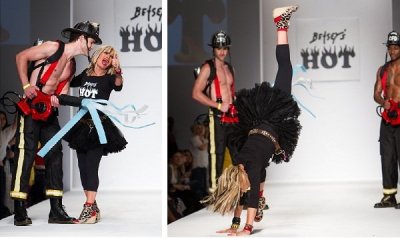 Before the show, I had a chance to sit down with the designer backstage to talk about how she ended up at LA Fashion Week.

“Maybe it will help kick the week off,” Johnson said. “At LA Fashion week, you see more young and new talent and I want to support that as much as possible. The best thing about it is the excitement and the enthusiasm.”

This was the third time on the runway for Johnson’s fall collection, which showed twice during New York Fashion Week in February—once at Mercedes-Benz Fashion Week and then again in a special encore presentation for the students of Marist College, who presented the designer with the fashion program’s Silver Needle Fashion Icon Award.)

After more than four decades designing fun, flirty and thoroughly original fashions, Johnson has seen boom times and busts, including rapid retail and licensing expansion, followed by bankruptcy, recovery and reality TV (“XOX Betsey Johnson,” which ran on the Style network). These days, her company is under the Steve Madden umbrella. Her advice for up-and-coming designers was a curious mix of aspirational and practicality: “Live through it because you love it, you’ve got to love it,” she said. “And don’t cut before you sell. Don’t make anything without orders. It’s all about making the bottom line. It’s hard for talented people to do business as well but you’ve got to do both.”

‘They’re really cutting and sewing here?” she asked, reminiscing about visits to the East Coast factories that produced her line years ago. “Doesn’t someone want to do a great Betsey Johnson denim line?” she mused.

Side note: At the end of my interview, I asked if I could take a photo. Betsey grabbed my camera, handed it to an assistant and threw her arms around my neck. The photo captures the scene so perfectly, I had to share. Take it all in: the neon, the faux fur, the folding table, the champagne, the portrait (Warhol? Looks like an Interview cover from back in the day). Pure fashion glamour.